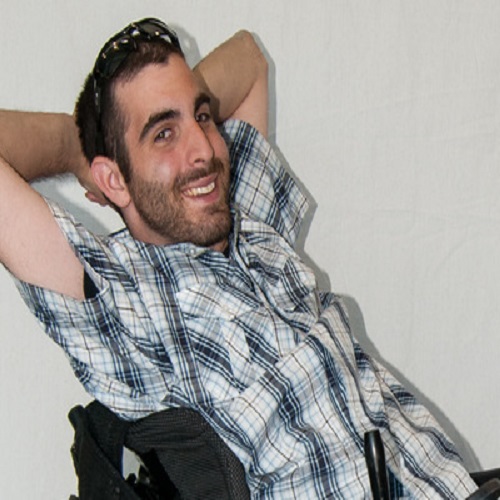 INTRODUCTION:
Alex Heide passed away July 26, 2013. He was paralyzed in a tragic snowboarding accident February 14, 2007. I guess you can say that Valentine’s Day, never had the same meaning to me after his tragedy. Alex was attending college in Pittsburgh Pennsylvania to become an air traffic controller when he broke his neck. In that split moment of time, he went through a physical metamorphosis and became a quadriplegic.
ALEX’S BEING:
As tragic as this story is, Alex’s true story is one of courage and his quest for love. As this memorial plaque states, “Alex had great charm, wit, and communications skills. People loved to be in his company. He had the ability to make people feel at ease, smile, and laugh.” Approximately 500 people attended his memorial service, and many of the people who attended were in wheelchairs and had disabilities. Alex was becoming a “leader” in the disability community. He exuded confidence and always tried to make people experience life from a positive perspective.
Alex rarely spoke about the accident and did not like to complain about all the inconveniences and health issues he had. He didn’t want to burden people with his problems.

HOW THE PLAQUE CAME TO BE:
At the conclusion of Alex’s memorial service, Alex’s sister, Aubrey, read an essay that he had written related to stereotyping. A few months earlier, when Aubrey was visiting Alex at his house, she saw something he had hand-written, which looked like chicken scratches on paper. Alex had to clinch a pencil in his fist when he wrote and only had few active muscles in his arm. The essay on this plaque came from that wrinkled piece of paper on his desk.
When Aubrey finished reading the essay, there wasn’t a dry eye in the house. In particular, it was a quite an emotional experience for the copious people with disabilities who attended. You can say that Alex had the last word at his own memorial service.
I received many comments and e-mails from people urging me to have the essay put into a memorial plaque and/or published. I was quite surprised and touched by the overwhelming response and all the people influenced by my son’s words. As one of my last endeavors on Alex’s behalf, I created a plaque, which is prominently displayed at both ABIL (outside the Spinal Cord Association Office) and at South Mountain Community College.
Dr. Olsen, South Mountain Community College President, heard about the essay and asked me if she could read it. I sent the essay to Sheri Olsen and Catherine Pettit, Director of Disability Services. Both were touched by the essay, thought it had a powerful-meaningful message, and believed it would have a positive impact if displayed.
It gives me great pleasure to present Alex’s essay. I hope you can glean his wit, sense of humor, and his being as you read his words.

Hello everyone,
My name is Mr. Disability; it’s easy to recognize me because I’m wheelchair-bound. However, I would rather be described as Mr. Quadriplegic, because this more accurately describes my physical condition.
Actually, I’m just kidding about using these descriptive labels to identify me. These are just a couple of generalized words commonly used to categorize someone with disabilities. I guess people feel more comfortable if they can classify a person so they don’t have to be part of the same group. I’m part of the one-size–fits all category – disabled wheelchair person. This tag is merely a simple way to help people distinguish between someone who’s “able-bodied” and those who – well – look like me.
Most African-Americans don’t mind being called “black”, those of the Jewish faith don’t mind being referred to as “Jews”, and homosexuals are OK when they are being referred to as “gay”. Right? Actually, I beg to differ. Someone who’s African American isn’t just “A Black”, someone who believes in the religion of Judaism isn’t just “A Jew”, and someone who’s intimately attached to someone of the same gender isn’t just “A Gay”. Similarly, people who fit the societal criteria of “wheelchair bound”, also, don’t want to be labeled as just “a disabled person”. We are all unique individuals. It seems that stereotyping people and placing them into specific categories is part of human nature — a fact of life. So, I believe, this is why we refer to people who are a little different as being “this or that”.

My Point Is:
Think twice before you start categorizing someone and giving him or her a label. Language is often used to describe someone, however, it does not accurately describe someone’s being.
It’s hard for me not to not to feel like the proverbial “elephant in the room” when I am introduced to a new group of people. However, when I have the opportunity to meet someone on a “one-on-one” basis, the disability seems to disappear and he/ she sees me as a distinctive individual. Prejudices seem to dissolve and people are open to seeing me as a person. I want people to like me and recognize me as a decent well-meaning regular dude. That’s the position I find myself fighting for all the time. I just want to receive the same courtesy one might give another “normal” person if I were to meet them for the first time. As someone who’s been dubbed, “severely disabled”, stereotyping becomes a huge obstacle whenever I try to work my way into a friendly conversation with someone. Often, people ask me absurd questions: Are you sick, afflicted by, suffering from such and such? — before they even bother to ask me my first name. Some comments are actually comical, such as, referring to me as transformer dude or professor X-man. Often, I have been compared with superman – Christopher Reeve, who also had an accident and became a quadriplegic.
In conclusion, all I’m saying is that my name is not Mr. Disability or Mr. Quadriplegic. I refuse to solely be identified by any labels because they describe my physical appearance. Trust me, there’s more depth to my being than what meets the eye.
So, with that being said, please allow me to reintroduce myself:

I’m Alex, what’s your name?
SUMMATION
As I reflected on the meaning of Alex’s essay, many things have become apparent to me. After Alex became paralyzed, able-bodied people often ostracized him. To remedy stereotyping and prejudice, he used his personality and communications skills to make people feel at ease, laugh, and smile. People who got to know him truly enjoyed his company, so being labeled a disabled person disappeared and people got to know his being. In essence, Alex just wanted to be loved.

Alex always wanted to make a difference. He wanted to be able to write and express himself, but felt he didn’t have the skills. He would be so honored if he knew his essay is permanently displayed at both South Mountain Community College and at the Arizona Bridge for Independent Living Center, for all to read and contemplate. This plaque is Alex’s legacy. This is who he truly was. His essay – his words are a portal into his being. His courage and love of life was and still is inspirational to me.

I am so proud of him.